Our featured collection this month is Incidents from Camp Life, Crimea 1855

Photography was developed during the early decades of the nineteenth century and was only ‘perfected’ and available for widespread use after 1839.

A few daguerreotype photos were taken during the US Mexico War (1846-1848) but the first systematic photographic coverage of a conflict occurred a few years later during the Crimean War (1854-1856). 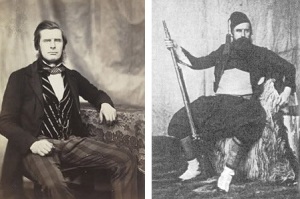 Two Self Portaits by Roger Fenton, one taken in England, the other in Sebastopol dressed as a Zouave.

The man responsible, the first war photographer, was Lancashire born Roger Fenton. From a well-to-do and well connected family (Fenton was born in Crimble Hall, Rochdale, on 28 March 1819. His grandfather was a wealthy cotton manufacturer and banker, his father a banker and Member of Parliament), Roger went to Oxford and then studied Law in London, but abandoned this to take up painting, which he studied in Paris in the late 1840s.

After the Great Exhibition in London 1851, Roger became fascinated by photography. By 1852 he had photographs exhibited in Britain, and travelled to Russia, to photograph the landmarks of Kiev and Moscow.

In autumn of 1854, as the Crimean War grabbed the attention of the British public, friends and patrons – among them Prince Albert and Duke of Newcastle, Secretary of State for War – urged Fenton to go to the Crimea to record the happenings. He set off aboard HMS Hecla in February, landed at Balaklava on 8 March and remained there until 22 June 1855. 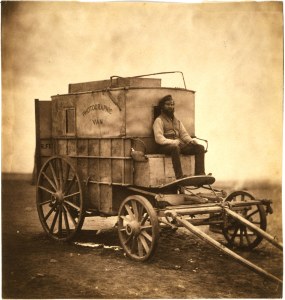 The early photographic equipment was extremely cumbersome and not very portable (which is why photography stayed mainly in the studio until the end of the century), and the methods used by Roger Fenton required long exposure and immediate processing in a darkroom. In Fenton’s case this took the form of a converted wine merchant’s wagon (which he photographed with his assistant Marcus Sparling shown seated at the front).

Because of this, it would have been impossible for Fenton to have captured any scenes of actual fighting. His pictures show scenes of camp life, portraits of commanders and heroes, panoramas of sites of battles and carefully posed ‘tableaux vivants’. Fenton didn’t photograph any scenes of actual death, but his letters and diary show that he saw plenty of the horrors of war.

Despite severe summer temperatures, breaking several ribs in a fall, suffering from cholera and also becoming depressed at the carnage he witnessed at Sevastopol, Roger Fenton managed to make over 300 usable large format negatives.

On his return, these were exhibited throughout England and copies published and sold. Our collection was digitized from an original folio album entitled ‘Incidents from Camp Life’ which is now in the care of Lancashire Archives. 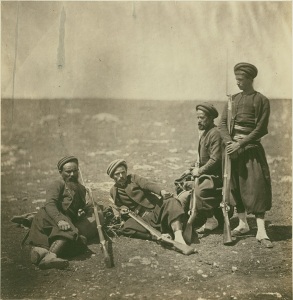 Zouaves in the Crimea

Roger Fenton continued photography and attempts to promote it until 1862, but was dismayed that photography was still considered a craft, for tradesmen, rather than an art form. He sold all his equipment and returned to the law, having created a tremendous body of work in just 11 years.

Roger died on 8th August 1869 at his home in Potter’s Bar, Hertfordshire after a week-long illness – he was only 50 years old.

Back to Red Rose Collections